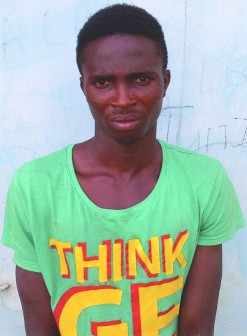 According to a story by PM News, officials of the Lagos State Government arrested the man you see above for having sex with a mad woman.

21-year old man, Lateef Sulaiman, for allegedly scaled a 14-feet fence to gain entrance into the Lagos State Rehabilitation and Training Centre, Majidun area of Ikorodu, Lagos, to have sex with the said mad woman.

Sulaiman was said to have jumped into the female dormitory around 9.30 p.m. and had sex with the mad woman before he was arrested and handed over to the taskforce at Alausa.

In his confessional statement at the taskforce headquarters, Sulaiman allegedly said he had had sex with a mad woman at the rehabilitation centre on five occasions before his arrest, saying that he knew where the female dormitory was because he had gone to the centre in the past to seek employment and had thoroughly studied the environment.

He was arraigned at the Special Offences Court, Alausa in Ikeja for his alleged offence
Sulaiman was slammed with a four-count charge. In the first count charge, he was said to have scaled the 14-feet fence of the rehabilitation home and slept with a  mentally ill inmate and thus committed an offence punishable under the laws of Lagos State.

Having pleaded not guilty, he was granted bail in the sum of N50, 000 with two sureties who must be civil servants and present evidence of tax payment for five years.

Sulaiman could not meet the bail conditions and was remanded at the Badagry Prison.

6 Responses to Photo: See The Man Arrested For Having Sex With A Mad Woman

The Reasons Why Some Nigerian Women Will Never Be Asked To Marry
How Do I Convince My Girlfriend To Have An Abortion?